Named after the earliest excavation in Chifeng Hongshan, Inner Mongolia, Hongshan culture is one of the most famous prehistoric archaeological cultures in northern China. It has an important position in the study of the origin of Chinese civilization, dating from 6500 to 5000 years ago. The exquisite jade artifacts unearthed from the Hongshan Cultural Site are known throughout the world.

In the Hongshan culture jade, there is an octagonal star jade, generally 10 cm to 15 cm in diameter, with a round hole in the middle, extending 8 corners, and the shape is abstract. A red-green octagonal star jade was unearthed from a Hongshan cultural site in Baxiang, Chifeng City, Chifeng Banner. In the past, some scholars believed that this kind of utensil was the head of the scepter, and the wooden handle or other handle was used as the scepter; or the object of worshipping the sun and the starry sky. However, in the field of Hongshan culture research, this instrument has not been given enough attention. 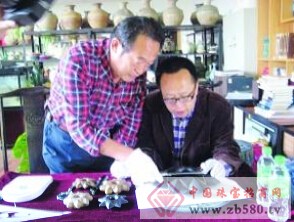 On May 12th, I made a special trip to the Museum of Ancient Civilization of Rende. The famous archaeological expert and the deputy director of the Public Archaeological Center of the Institute of Archaeology of the Chinese Academy of Social Sciences, Liu Guoxiang, studied the new collection of the Red Mountain. The cultural octagonal star jade, pointed out: this Hongshan culture octagonal star jade, reflecting the cosmology of Hongshan culture ancestors.

Liu Guoxiang graduated from the Department of Archaeology of Peking University. He is currently a researcher at the Institute of Archaeology of the Chinese Academy of Social Sciences, a jade expert, an expert in the Beijing Wenbao Cultural Relics Appraisal Center, and a visiting scholar at Harvard University. He has participated in the archaeological excavation of the Xinglongyu Cultural Site in Aohan Banner, Inner Mongolia. The research results of Hongshan cultures such as Xinglongyu Culture have attracted attention at home and abroad. He convened and presided over the three-time "Chinese Jade Culture Famous Forum" and other academic seminars on jade culture, which caused a great reflection. The editor-in-chief "Famous Jade" (1, 2, 3) is waiting for the work.

In an interview, Prof. Liu Guoxiang introduced: At the beginning of May this year, he invited Northeast Normal University to come to Changchun to give lectures. In the meantime, Mr. Sun Shulin, the curator of the Museum of Ancient Civilization of the North of Rende and the chairman of the Hongshan Culture Research Association of Jilin Province, told him that Rende North Ancient Civilization Museum collected a jade in Inner Mongolia. He saw an octagonal star jade, dark green, polished, large body, outer diameter of 28 cm, not seen in the official excavation. This octagonal jade geometry is standardized in that the abdomen has partially overlapping squares with a round hole in the middle and the octagonal tip is on the same circumference. That is, this octagonal star jade has a round and square shape. According to the research, the age of this octagonal star jade should belong to the period of Hongshan culture, and it may be the late period of Hongshan culture. The late Hongshan culture was 5,500 to 5,000 years old. 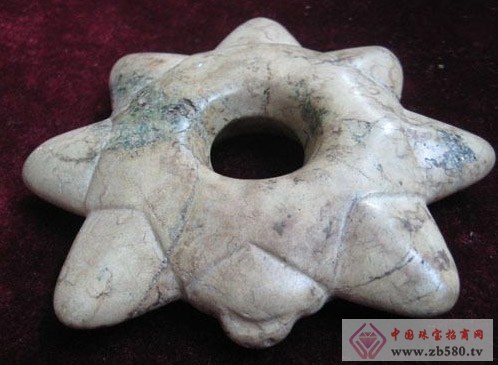 This octagonal star jade is very large, there is no trace of wear and wear inside the middle hole, obviously it cannot be the first of the scepter. So, what is it used for? Researcher Liu Guoxiang began to consider the issue of flower and bird painting. He feels that this object is quite strange in shape. The ancients must have a clear function, and there are obvious geometric concepts - there are squares and rounded octagonal. He thinks that in the Dawenkou culture from 6,000 to 5,000 years ago, the pattern of the anise stars is painted on pottery; there are similar in the Lingjiatan cultural relics of Hanshan County, Anhui Province, about 5300 years ago. The discovery. For example, a double pig head jade eagle was unearthed from the Lingjiatan Cultural Site. Its belly has a circle with an octagonal star pattern. A turtle shell was also found in the Lingjiatan cultural site, and the back of the turtle shell was also patterned with an octagonal star pattern. The existing archaeological data show that the Hongshan culture in the Liaohe River Basin and the Lingjiatan culture in the Jianghuai region have a certain cultural exchange relationship. This octagonal star jade may have a certain connection with Lingjiatan culture turtle shell and double pig head jade eagle.

What is its shape like? Researcher Liu Guoxiang consulted relevant materials. When he saw a jade turtle unearthed from the Lingjiatan Cultural Site in a monograph, he was suddenly inspired to hold the two corners of the octagonal jade with both hands, feeling that it was obviously like a "turtle" shape. - There are heads, feet, and tails. It turns like a continuous turtle, a complex of turtles. Coincidentally, Mr. Sun Shulin also took out several small octagonal objects in the museum collection, with jade and stone tools. Very accidentally, Liu Guoxiang found a piece of dark green octagonal jade carving a turtle's head on one corner, with two small pits, clear eyes, and a shape of a turtle. This proves that the octagonal jade is an artistic expression of an abstract, continuous turtle. The prototype should be a turtle, which reflects the worship of the turtle during the Red Mountain culture period.

Researcher Liu Guoxiang said: From the current archaeological materials, the turtle played a very important role in the Neolithic Age in China and occupied a very important position in Chinese history. For example, in the Jiahu site in Wuyang, Henan Province (from 9000 to 8000 years ago), it was discovered that there are small stones in the real turtle shell, which may be used for divination. In the Yin Shang period, the turtle was used to engrave the oracle bones. According to the literature records and some scholars' research, it is concluded that the Huangdi tribe and the Hongshan culture have a certain connection. The turtle may be the totem of the Yellow Emperor.

In the Neolithic Age, use the burnt offerings and use the burnt offerings. In the history of China, Yi and Yi have been going on for a long time. However, in the Hongshan culture, no examples of cockroaches were found. In the Hongshan Cultural Site, there are round altars and square altars. It is generally believed that the circle is the sacrifice of the sky and the square is the sacrifice of the land. This octagonal jade contains round and square shapes, and the diameter of the middle hole, the length of the abdomen square and the outer diameter are 7 cm, 14 cm, and 28 cm, respectively. Therefore, judging it is a ritual, there is a function for sacrifice, and there may also be astronomical functions, expressing an understanding of the relationship between the ancestors of the Red Mountain and the universe, a concept.